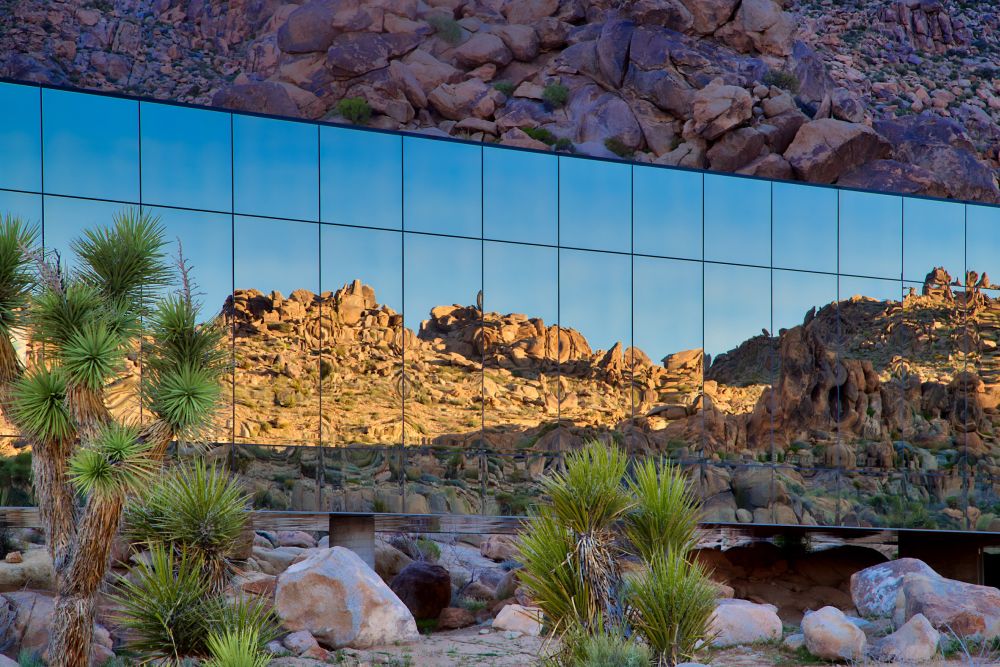 Designer Tomas Osinsk and Los Angeles film producer Chris Hanley have created a mirrored house near Joshua Tree National Park, designed to look like a New York skyscraper on its side.

The Invisible House sits on a remote site 10 minutes from Downtown Joshua Tree, California. The property is available to rent for filming, photography and events. 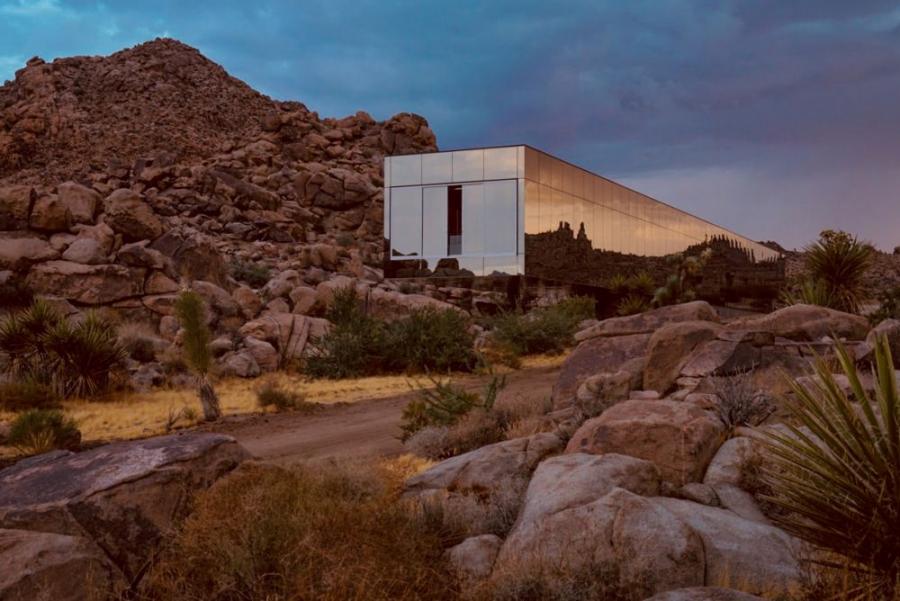 Hanley, the Los Angeles film producer behind American Psycho, worked with architect Tomas Osinski to develop a long and slender steel-frame house clad in mirrored, tempered glass typically used for skyscrapers. It is elevated above the ground on cylindrical concrete columns, forming a cantilever at one end. 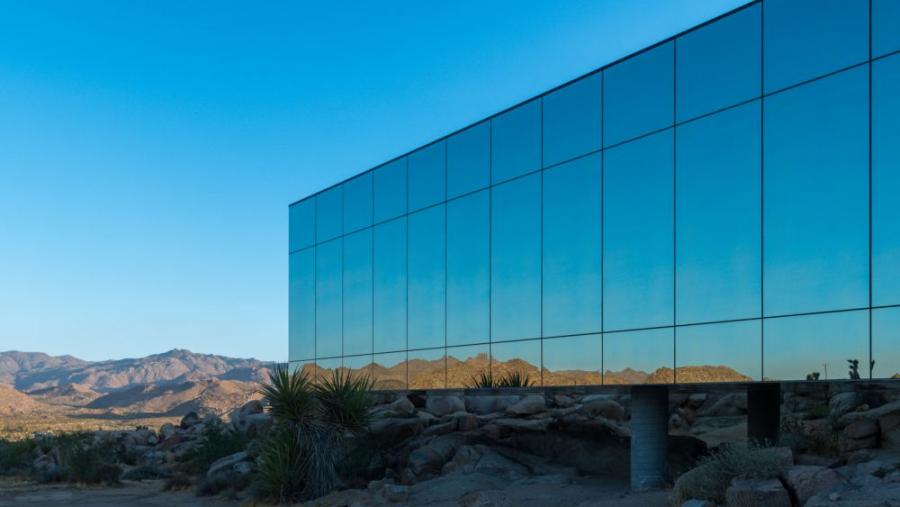 Inside, the mirrored glass walls offer expansive views of the private 90-acre surrounds, while the metal structure is left exposed in the ceiling.

The 5,500-square-foot (511-square-metre) house is designed as one long, continuous entertaining space around a 100-foot-long (30-metre-long) indoor swimming pool. 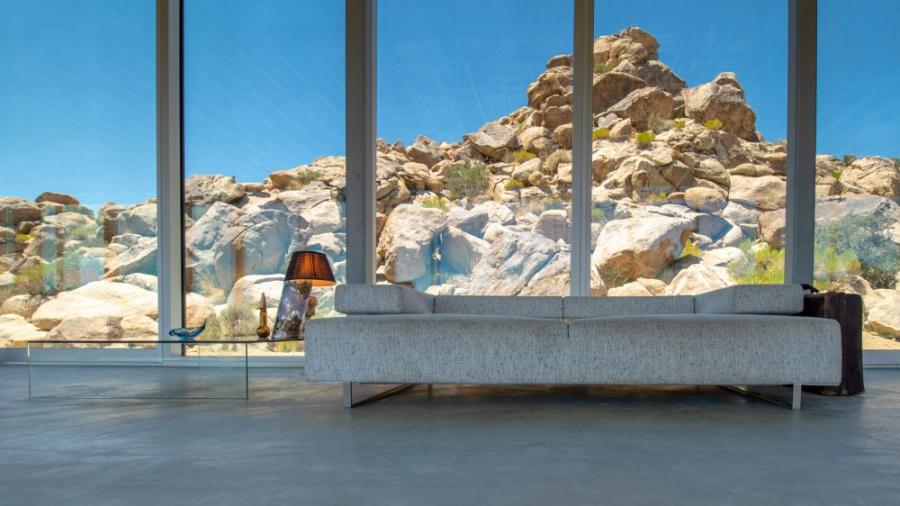 The living room and dining area are arranged on the concrete floor around the pool. They include different setups of sofas and chairs. Sliding glass doors also form a large portion of the wall on the west side to open the interiors up to the outside. 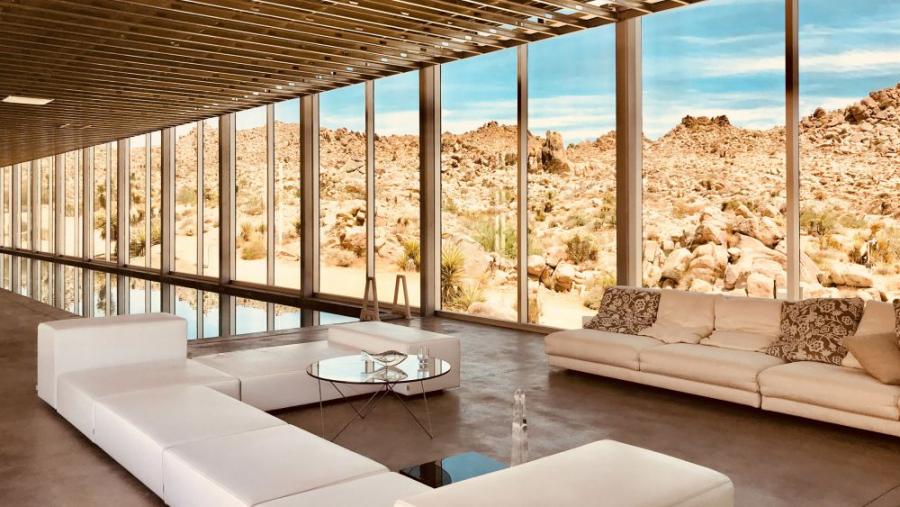 The pool ends at a white wall designed as a projection screen for movies, while at the other end is a kitchen designed to be suitable for catered events.

The remaining areas, including four bedrooms and bathrooms, are separated by white partitions rather than doors with views of the desert. Furnishings continue the aesthetic of the house, including a glass bed frame and an exposed glass shower. 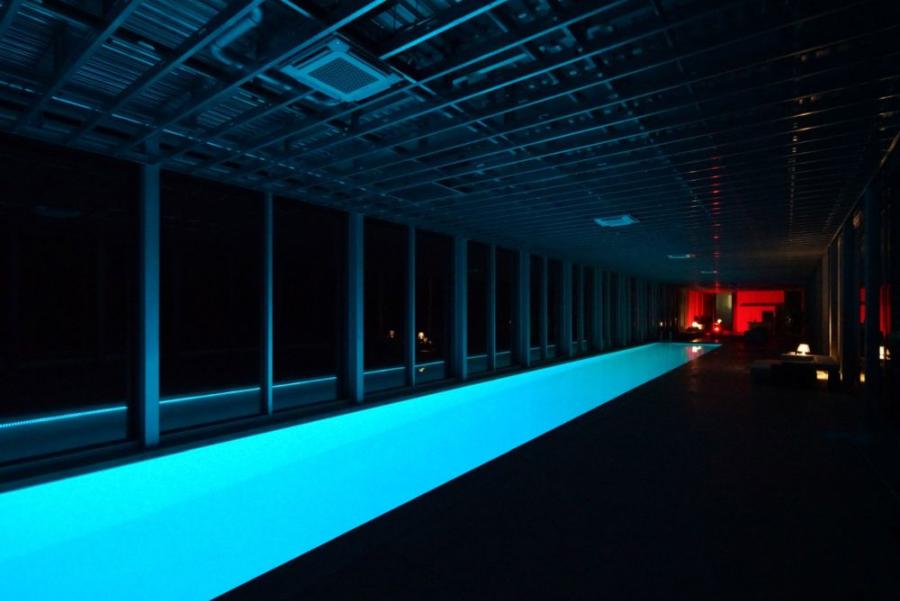 Hanley is an LA-based producer behind films including American Psycho, The Virgin Suicides​ and Spring Breakers​. He also has plans to build another house from splayed shipping containers in nearby Joshua Tree National Park.

Called Container House, and designed by London architect James Whitaker, the proposal was one of Dezeen's most popular stories in 2017.

A mid-century home that Los Angeles studio Mini Inno recently renovated into a holiday home, a weathering steel cabin by Cohesion Studio, which is also available to rent, and a black house Oller & Pejic designed to look like a shadow are among other houses in the US national park. 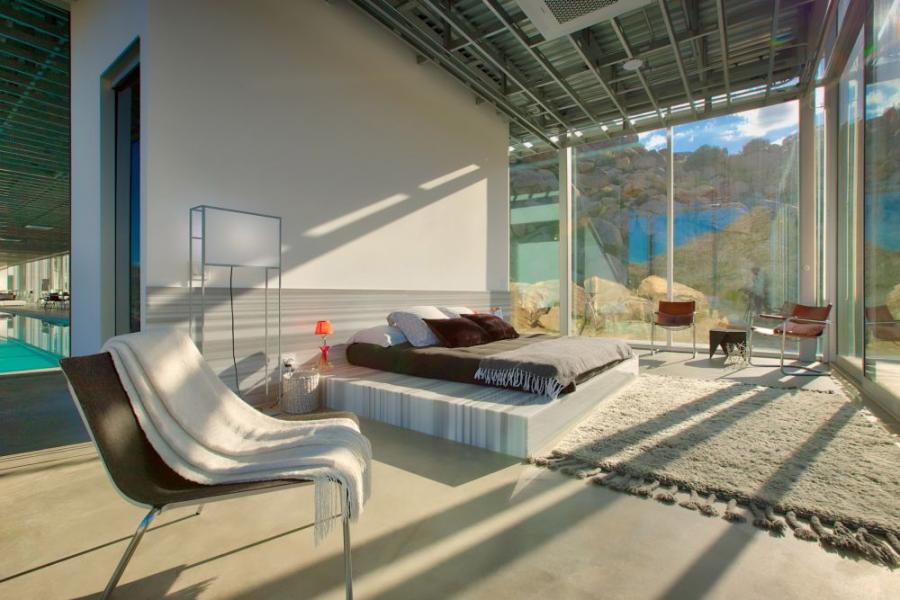 Update 24/06/20: Following reader comments about the potential risk to birds, the owner of the house has given more details about its environmental credentials.

Before constructing Invisible House, the designers carried out a biological survey to map out all the local plant and animal species. 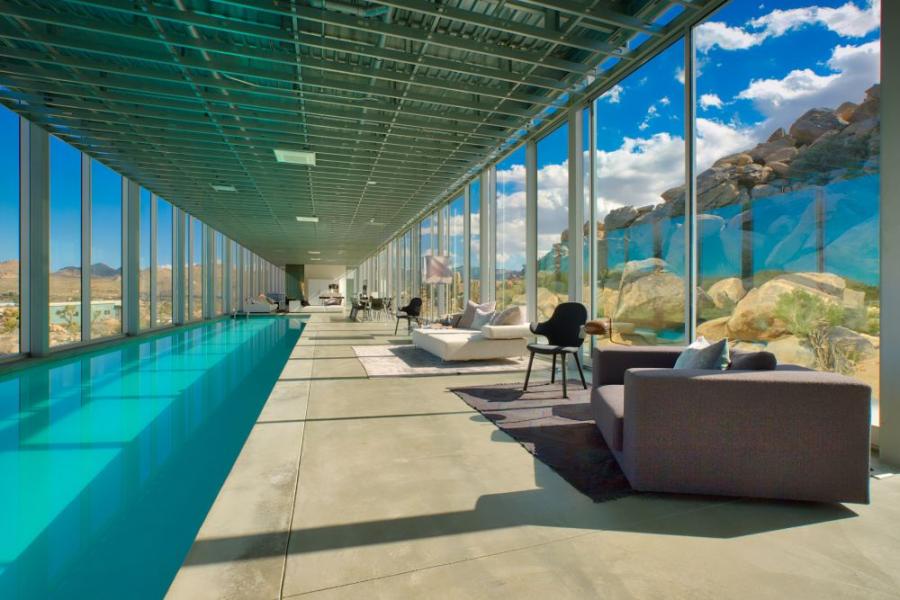 Subsequently the home, which has a 2000 to one landscape to dwelling footprint making it the smallest home on any property in Joshua Tree, was constructed inline with all federal, state and stringent local environmental laws and regulations. 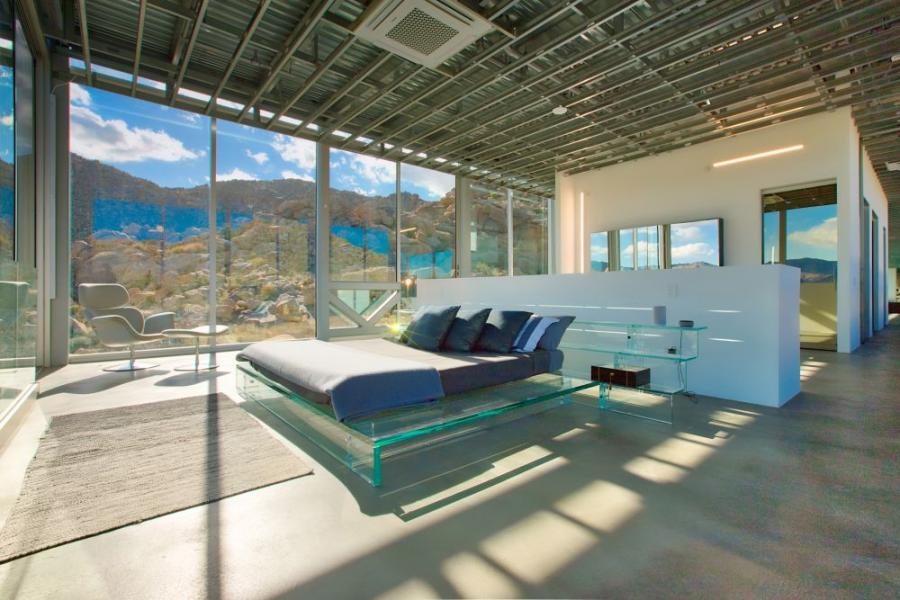 "The birds specifically are not harmed by the glass cladding," said Hanley. 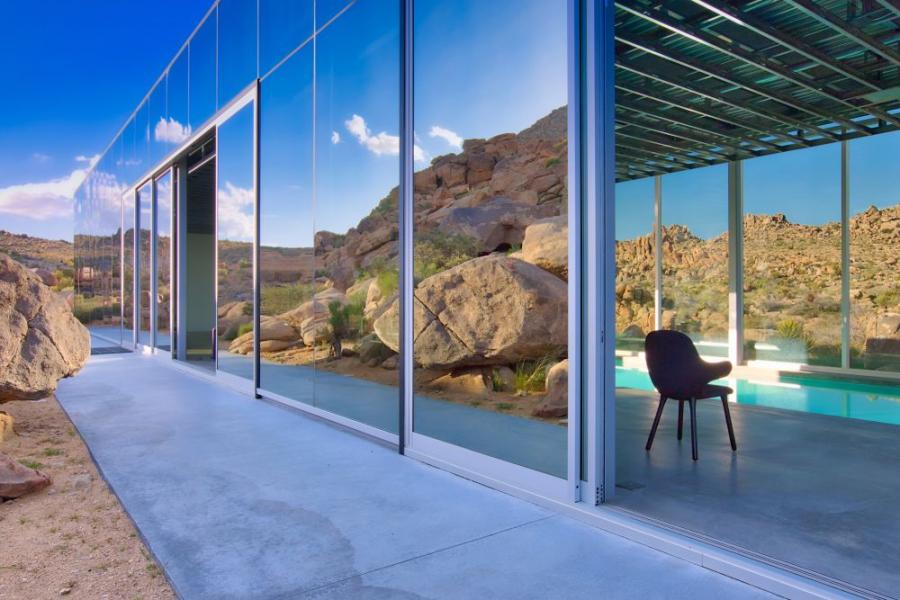 "While the glass was being installed some bird species liked to live inside the house and had a difficult time finding their way out," he continued. "Since completion there has been no harm to birds, the birds like to live around the areas of the house and thrive on the insect life they feed on." 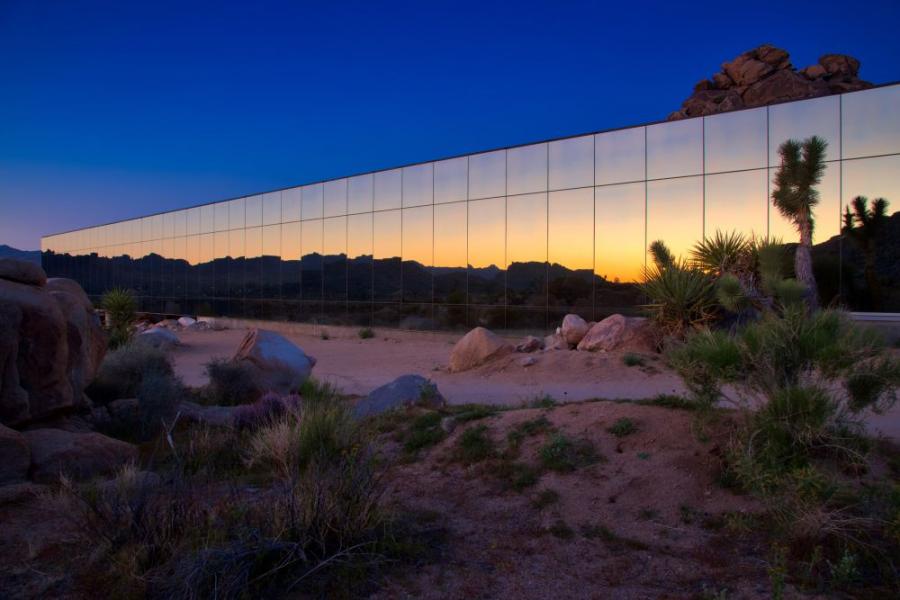 The designers aimed to reduce the environmental impact of the home by using low-emissivity glass for the walls and installing photovoltaics and a thermal water heating system on the roof. 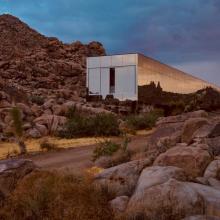 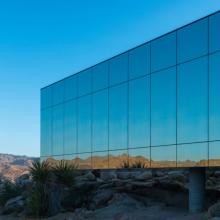 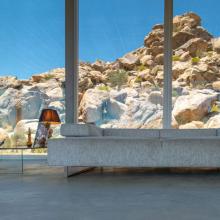 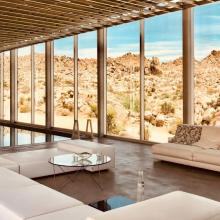 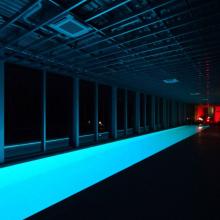 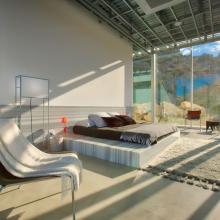 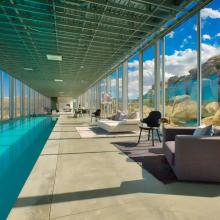 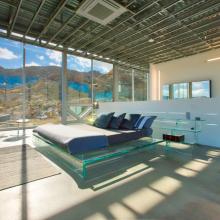 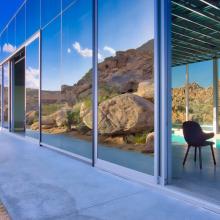 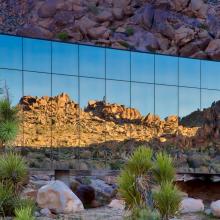 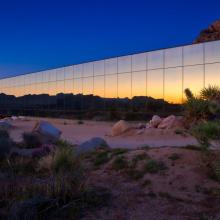 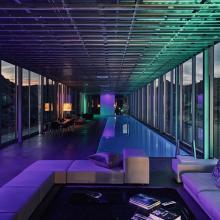