Mies van der Rohe: the modernist architect who led the Bauhaus to its end

The third and final director Bauhaus director was one of the world's best-known architects. As we continue our Bauhaus 100 series, celebrating 100 years of the hugely influential school, we profile the modernism pioneer, Ludwig Mies van der Rohe.

Ludwig Mies van der Rohe, simply Mies to the entire world of design, is one of architecture's most towering figures. Whether it is his gnomic statements – "less is more" and "God is in the details" – or the iconic Barcelona Pavilion or equally iconic Barcelona Chair, his presence borders on the mythic.

As William JR Curtis has put it, he is "one of those architects who refuses to go away." 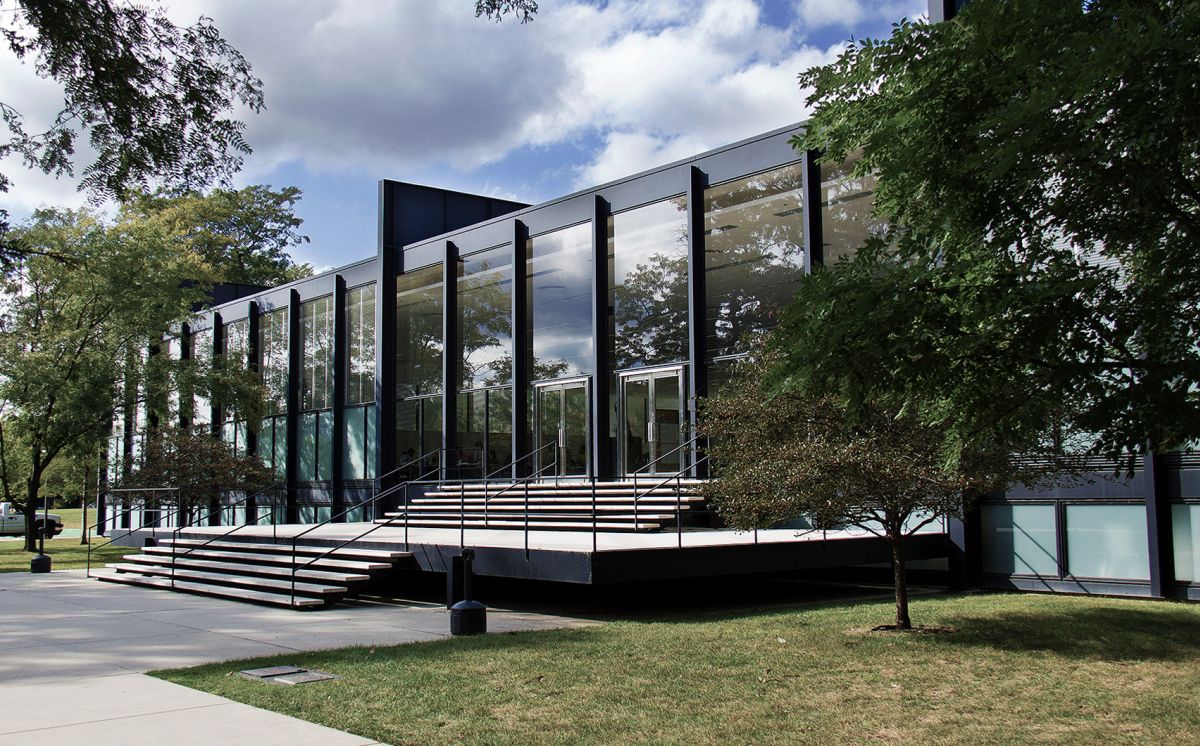 Mies better known for buildings than he is the Bauhaus

Mies is perhaps now best known for his American skyscrapers such as the Lake Shore Drive towers, Seagram or IBM Plaza – designs that have seen him shoulder the blame for any dull glass tower since. Yet the gestation for these works, and his shift from more classical designs to modernism, all took place in pre-war Germany.

Likewise, while he is remembered as an educator for his time as head of the Illinois Institute of Technology (IIT), less frequently discussed are the few years he spent at the helm of an incredibly beleaguered Bauhaus.

Mies is perhaps remembered more for his time as head of the Illinois Institute of Technology than he is for leading the Bauhaus. Photo is by Arturo Duarte Jr

Mies' entrance into the Bauhaus was never going to be particularly easy. Walter Gropius' successor, Hannes Meyer, had been dismissed from the school in 1930 by Dessau's mayor for allegedly politicising the students with his communist views.

After an unsuccessful attempt to convince Gropius – then focusing on his architectural practice – to return, the mayor instead suggested Mies, who was appointed that same year.

For all the Bauhaus' reputation of making careers, Mies entered the school as a fully-fledged member of German's avant-garde, imposing his own (then still relatively new) ideas about what modern design should be.

Mies, Gropius and Le Corbusier all worked for Peter Behrens

Mies was born in Aachen in 1886. The son of a stonemason, he would work in his father's workshop and for several design firms prior to moving to Berlin in 1905, looking to join a notable architect's firm.

He joined the office of Bruno Paul, an interior designer and architect with a taste for efficiently planned, abstracted classicism who would later design a house and two restaurants for Cologne's Werkbund exhibition.

While working for Paul (but supposedly resisting all of his advice and offers of help), Mies completed his first building: the surprisingly traditional Riehl House in Potsdam. 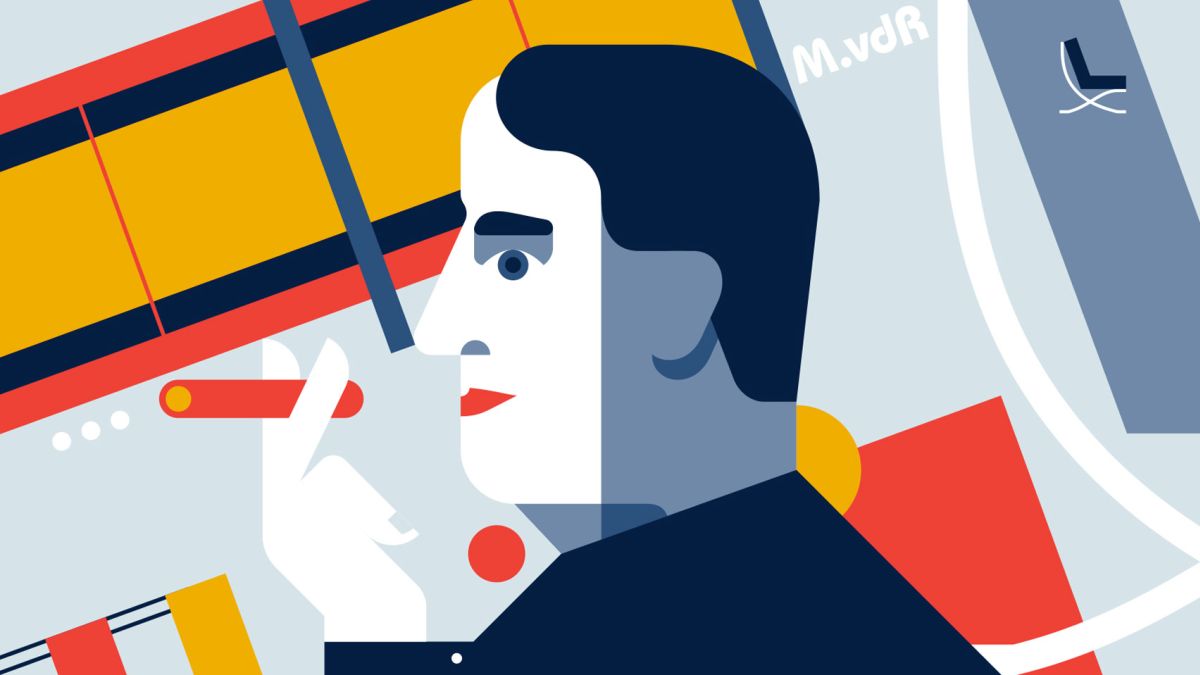 Impressed by this 21-year-old's debut, Peter Behrens offered Mies a job in his office – alongside Gropius and Le Corbusier – initially working on the AEG Turbine Factory. Mies was building his reputation as a designer of houses for the upper classes and, to better mingle with this clientele, he dropped his birth name – Maria Ludwig Michael Mies – for something classier, adding his mother's surname Rohe and the Dutch "van der" due to the protected nature of the German particle "von".

This, along with time spent in the second world war building roads and bridges, saw Mies' architectural approach shift. While he still indulged in the odd neoclassical design, he was building a reputation for his visionary modern ideas.

He served as architectural director for the Werkbund, helping to organise the model Weissenhof Estate, worked with design magazine G and was a founder of architectural collective Der Ring. His striking modernist debut, never built but immortalised in photomontage, was the 1919 Friedrichstrasse Skyscraper, its glass skin and steel bones a sign of things to come. 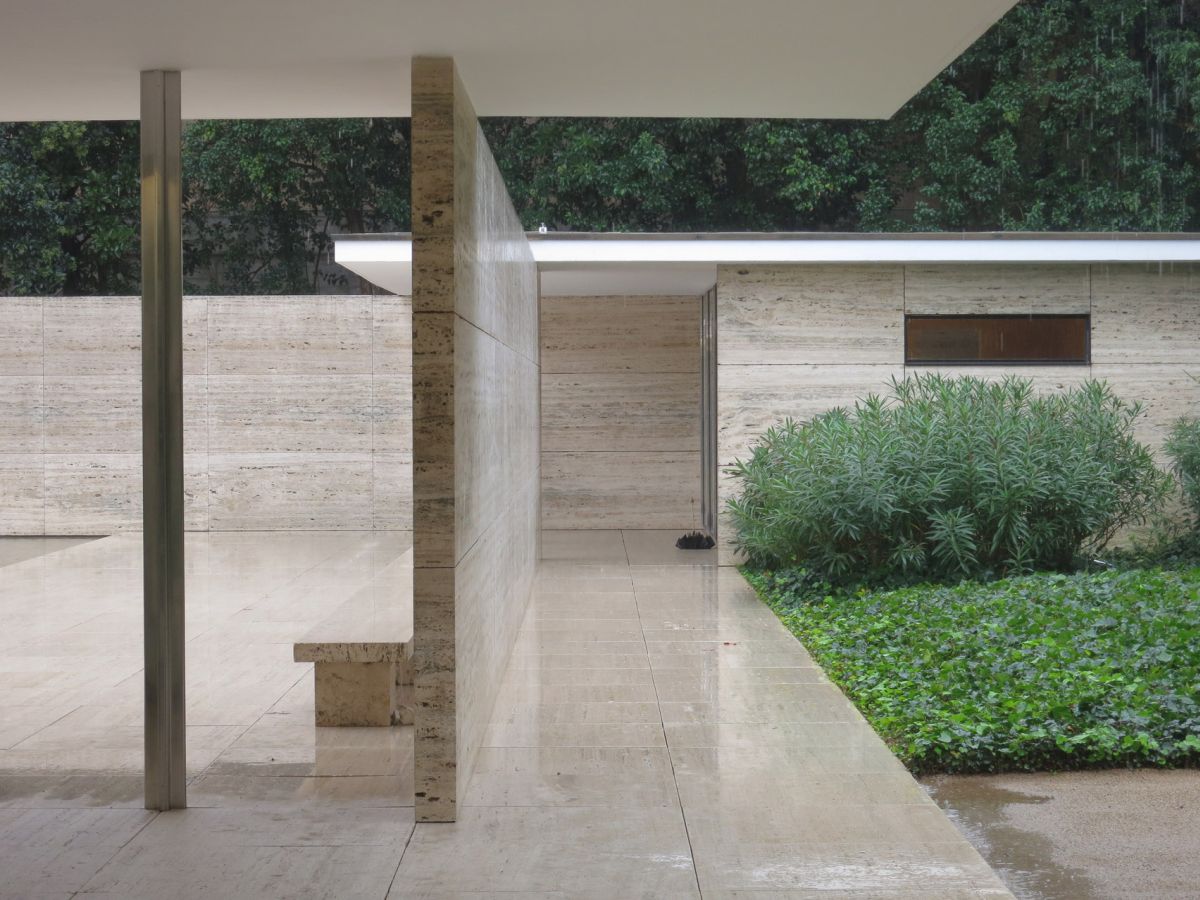 Mies designed the 1929 German Pavilion, best known as the Barcelona Pavilion, a year before becoming Bauhaus director. Photo is by Christian Gänshirt

It was his successful administration of the Stuttgart Werkbund exhibition that landed Mies the commission for the 1929 German Pavilion at the International Exposition in Barcelona: one of his most seminal works. This formal composition of planes was, according to its commissioner Georg von Schnitzler, to give "voice to the spirit a new era". Mies likely cared little for its role as propaganda, more as a means of exploring the ideas of a free plan and floating roof.

Mies was an apolitical Bauhaus director

A year later, taking on the thankless task of directing the Bauhaus at an extremely charged political moment, Mies seemed to view the situation in Germany more as an annoyance that got in the way of work. This was in some ways the point: he was to be the apolitical director after the openly communist Meyer, who would steer the school clear of any further political scrapes.

Mies' approach to quashing these irrelevant political activities was brutal, described by some as authoritarian. Each student was individually interviewed, and threatened with expulsion if they did not follow the new rules. 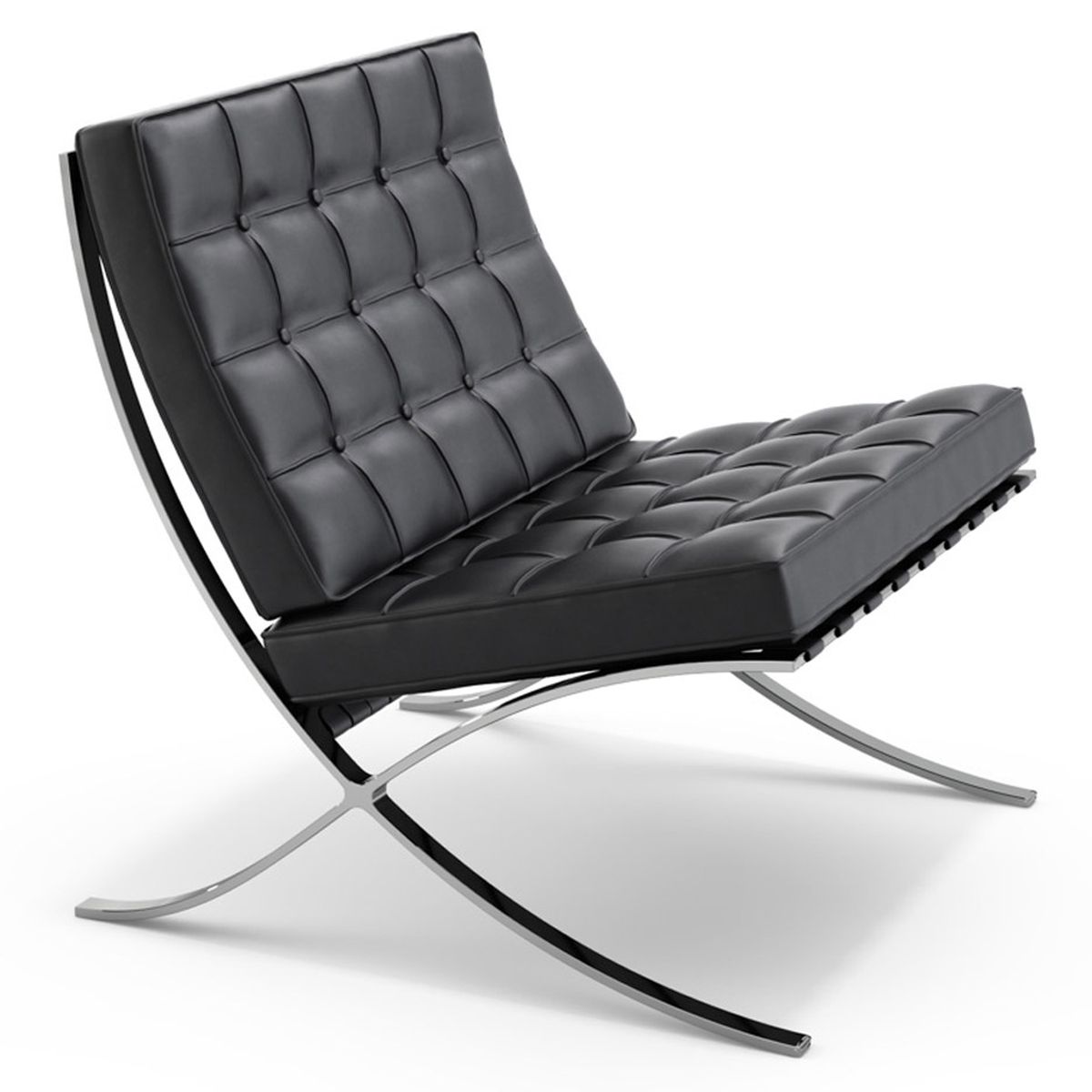 Political discussions were to be avoided, they were not to stay late in the canteen, and they were to not make any noise in the town. Activism was repressed, as were controversial works, and Meyer described it damningly as "a return to the school of instruction".

There was, however, a shift almost completely towards architecture – furniture, metal and mural workshops were merged into interior design. Paul Klee left, and Wassily Kandinsky found himself somewhat twiddling his thumbs. Much of this was done in Mies' own image: his only new staff appointment was Lilly Reich, his collaborator and for a time romantic partner, and a sense of Miesian aesthetic hegemony soon took hold.

Mies paid for the Bauhaus' final home in Berlin

How much Mies was attempting to establish modernism as apolitical in order to survive under Nazism is debatable, but this quickly proved ineffective: when the Nazi party gained control of Dessau's council it closed the Bauhaus.

Mies used his own money to rent a derelict factory in Berlin that would serve as a short-lived third home for the school, during its lesser-known year in the German capital. Students worked to rehabilitate this factory, and for almost a year worked undisturbed, until the Gestapo raided the school, suspecting it of producing anti-Nazi propaganda.

Mies protested and eventually the school was allowed to reopen, provided certain teachers, including Kandinsky, were replaced with individuals who would better support Nazi principles. Mies and the other staff members deemed it better to voluntarily close the school themselves. 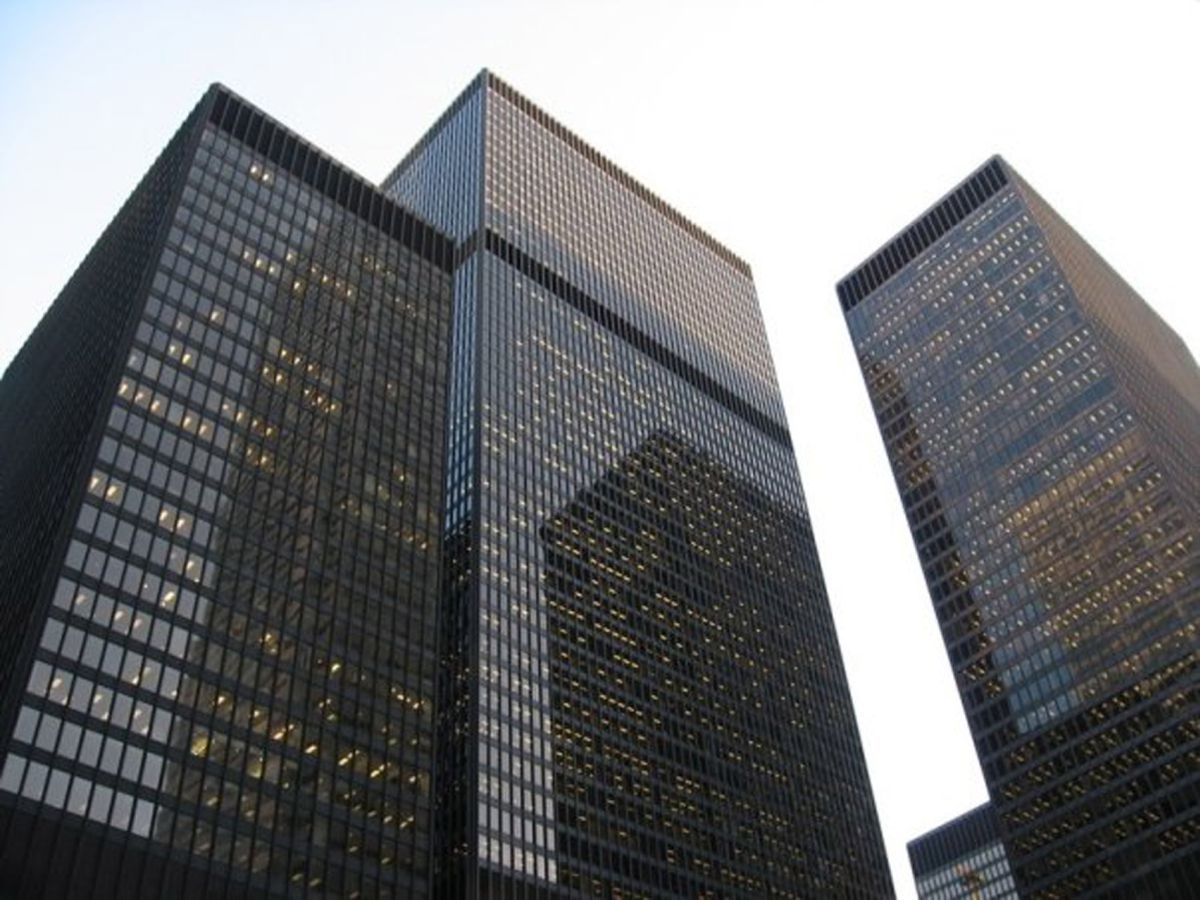 Mies' skyscraper designs would set the tone for North American corporate architecture for decades. Photo is by Alexpankratz

Between the Bauhaus' final closure and Mies' emigration to the United States, he built very little. Like Gropius, he entered the 1933 Reichsbank competition, but otherwise seemed determined to wait out the Nazis, drawings criticism from former Bauhaus colleagues who had left the country with far more haste. Reluctantly, in 1937, he moved to America.

In the United States, post-Depression, Mies found plenty of corporate clients willing to realise ideas that had seemed impossible in Germany – Modern Architecture: International Exhibition at New York's Museum of Modern Art in 1932 had already made Mies' name known.

He redesigned and taught at the IIC from 1938 to 58, and would become an American citizen in 1944, defining, for better or worse, what would become the accepted mode of building cultural, educational and corporate architecture for decades. 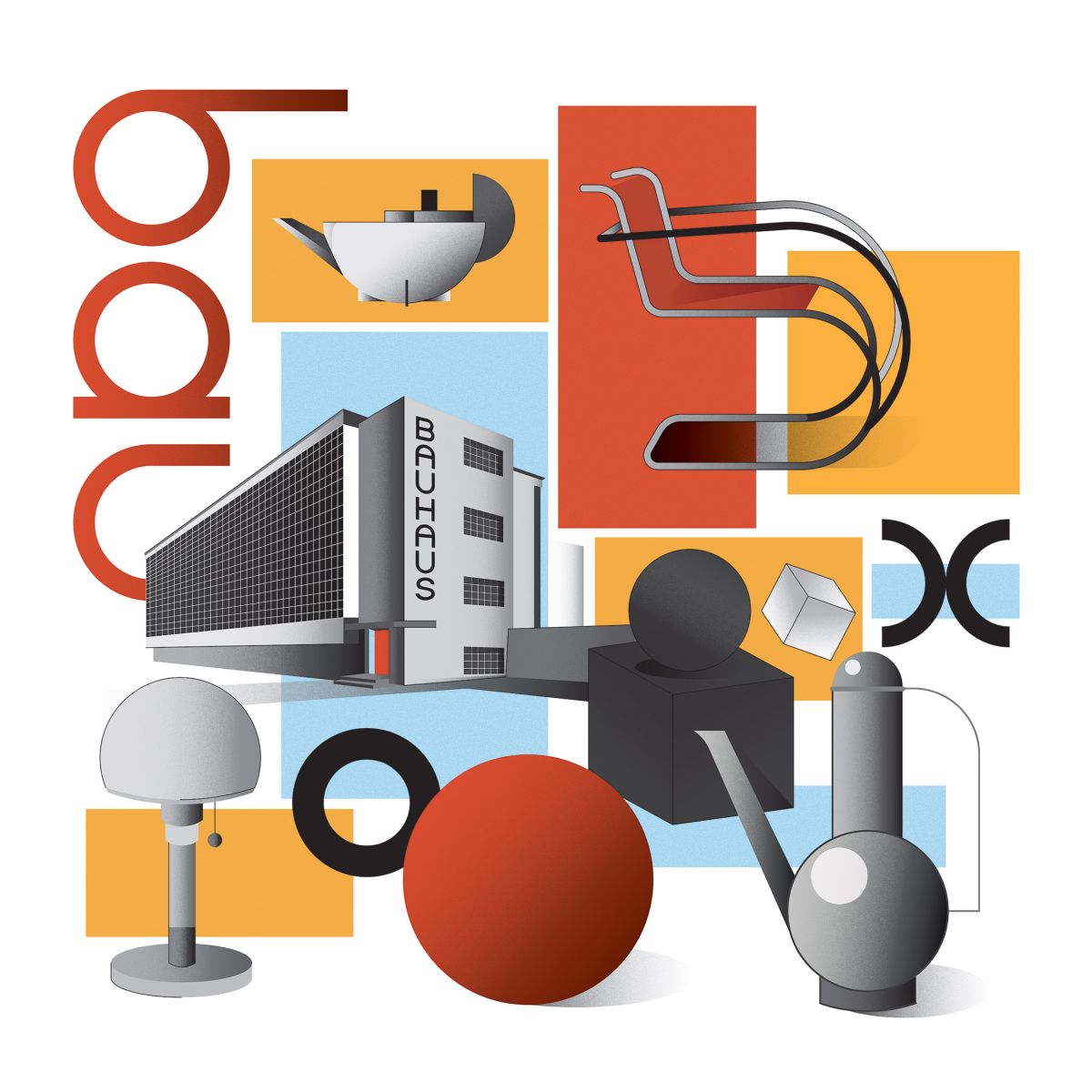 Home Decor Items That You Shouldn’t Skimp On, According to Designers

5 Gorgeous Living Rooms to Inspire Your Next Redesign

Why Is The Thermal Envelope So Important?

Most Weird And Wonderful Buildings In The World. These Are Strangely Beautiful.

Is Coronavirus the Beginning of the End of Offices?